I don't think I'm a very good teacher. I can't tell whether that is likely to change. I met a friend coming out from his class & he said, "Whew! I always collapse after class on Friday—I think that I don’t ever want to read another book again.” And I think: I have no trouble with the books, I love the books, but I have the hardest time with the people. I’ve never enjoyed being in that sort of position, and I’m really not sure that I’m made for it.

Or I might just have an aversion to the living. I like the company of Xenophon, even if he uses the conjunction ‘ωσ too much. Battle and exile, executions, one thousand soldiers here and five hundred there—there’s no varnish over it. I understand that world, even if I wouldn’t want to live there.

Or to live anywhere. Growing old with my trousers rolled and fewer ideas by the year. I know, there is no way to live except the ways we live. So if I can’t or won’t teach then I just don’t belong at a university. But if what I write never finds its window, if I will always do it only out of love, in the dark, how the hell do I fill the days?

Neck better today. How bizarre this all is. And it's almost October.... our element,
Cold is our element, and winter’s air
Brings voices as of lions coming down.

At 6:30 this morning I turned over in bed, three-quarters asleep, raised my head and yawned: something snapped and instant agony clutched the back of my neck and scalp, the kind that makes you groan and breathe in sudden sharp bursts, as if giving birth. Hoo-wee! Tried to sit up, too painful; tried to roll over, too painful; tried to turn my neck, too painful; brilliant! said I. I shall have to remain in bed for weeks on end, in precisely this position, and I really need to use the bathroom. Eventually I figured out how to support my head with my hands so that I could get out of bed and back in; called the university “advice nurse,” who said it sounded like I’d done something freaky to a tendon and I should take a ton of Advil. By this time J. was awake, brought me an ice pack and made me oatmeal (bless her), and gradually things got better. Made it to campus long enough to get some books on Ezra Pound. I still can’t turn my neck very well, so I get to do this amusing Frankenstein shuffle to look at anything to the side.

This sort of thing seems to happen a lot to grad students; everyone’s got a similar story. Our best years!

Long Times article about the declining birthrate in Europe was unexpectedly sad; I don’t especially want children, and yet it seemed like a loss of faith in life. A wage-laborer’s mentality: marking time in the world until we’re allowed to leave.

I am not this exhaustion;
I am a lucid pattern.
Refine me into that pattern.

refine you into white nerve nets

1,115 words. Soon it will move beyond the blastocyst stage, and then it will become a sin not to finish it.

Oh my honey, honey,
Where’s the money, money?
You gotta sit in the chair,
You gotta fight that despair,
You’re a Golden Bear!

Pretty soon I will need to sit down with some prof or another and have some Straight Talk about where all this is going: i.e., when we give “placement” statistics for UCB grads, to what extent are we “placing” them in positions somewhat similar to the positions of those instructors whom they regularly encounter and who serve them as implicit models for the profession, with 2/2 or 2/1 course loads and scads of grad students to do the dirty work; and to what extent are we “placing” them in those secret positions no one likes to discuss with 4/5 course loads before the committee work, seventy percent of which is freshman comp, guaranteed to have them grading till three in the morning and thanking their lucky stars that at least their health plan covers 80% after the deductible? ‘Cuz those are jobs for saints, and I am a bitchy aging aesthete with a massive sense of entitlement.

So some numbers would help.

Never Begin a Sentence With This Clause

"In accordance with the German purity law, this superior beer is brewed with a minimum of 50% malted wheat."

Class today was not awful, but there were clearly certain things I could have done better. If the situation were such that anyone in the country actually wanted another English professor, I would feel less need to astound coming out the gate. We have our natural strengths, and then we don’t.

Yesterday I wrote 600 words of a new piece. I don’t know if it will go better than this summer’s false start; I certainly hope so, I’m not really trying to impress the world any more. It does feel very much itself. I’m trying to keep out the foreign elements. I’m trying to keep it short.

what was the first word?

Courtesy of J., Kaija Saariaho and a lot of others came by for my birthday—now the stereo is booming with undulating voices and singing strings and all the things around me seem comforting, as my body around me seems comforting, which is how it is on the good days. I should give myself genuine weekends more often.

Midday espresso kicked off a supernova—you shoulda seen it blazing out from the fossae, brighter than the September sun without— I had been reading, felt some kind of ekstasis, then came home and remembered the slowness and worry. I played with my tremolo pedal for a while, and that was fun, but a slow tide of reproach is mounting and will continue to mount as long as I am not writing another book. When I am not writing there are no grid lines to plot against (school doesn’t count), and it was wonderfully relaxing for a while; then I discovered that I had drifted out to sea, and that the sky is overcast with a uniform glaucous glow, and I don’t know which way is north.

J. and I took some of our damnable books to Moe's yesterday, got three figures in trade credit and promptly spent most of it. I got an edition of Aeschylus with this helpful card pasted to the inside cover: 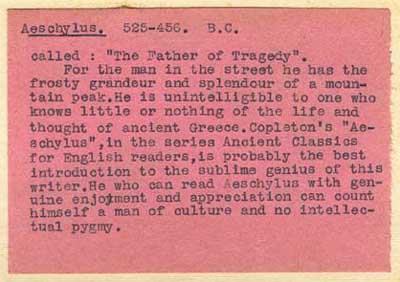 "The whole of Benjamin's output testifies to the fact that all his life he was striving to write the one book that would sum up all his views and justify an existence which otherwise seemed quite without meaning, while all the time growing more and more aware that such a book was an impossible mirage. Not because he could not do it, but because books cannot.”

—Gabriel Josipovici, The Lessons of Modernism

Oh, that’s isn’t up any more. It folded so fast, and you have to clear something—

All over Berlin I was looking for Ludwig Wittgenstein und der Wiener Kreis, i.e. “Ludwig Wittgenstein and the Vienna Circle,” but predictably enough I started calling them the “wiener circle” and it’s still funny! Just like the Frankfurt School minus Benjamin—Frederic Jameson in the LRB: “... Marcuse called it ‘repressive desublimation’...”

J.: “And still no one asked him to dance! Seriously, Marcuse and Adorno and Horkheimer are all standing at the edge of the dance, in their bow ties and glasses, watching the girls.”
“Are you going to ask her?”
“I can’t imagine it.”
“I have not had enough to drink, and I will not let myself have enough to drink.”
“Well, she’s one of your students, Teddie.”

I don’t know; is that archive link on the left not working? If you’re using an old URL, changing www.metameat.net to atem.metameat.net should do the trick. I hope. I don’t necessarily know what I’m doing here.

Conversation over dinner was about oddball questions that one gets during one’s qualifying exams; e.g., “What is the most important word in Huckleberry Finn?” Of course everyone’s first answer is “nigger,” but what if you try to read it from 1884 instead of 2006?—are there other words that aren’t just part of the dialect, that go deeper into the book’s structure?—(insofar as the last third doesn’t completely scuttle that structure)

When I was asked the same question about Ulysses, my two contenders were “mockery” and “parallax,” of course with honorable mention for “Yes.”


Texts and images copyright (C) 2022 Pauline Kerschen. Layout adapted from the Single A Tumblr theme by businessbullpen. The Greater Roadrunner (Geococcyx californianus) has zygodactylic feet, leaving X-shaped tracks with ambiguous direction. The Pueblo and Hopi used the X symbol to mislead evil spirits. Border folklore in the early twentieth century held that a roadrunner would lead a lost traveler back to his path. In Mexico the roadrunner is known as paisano, countryman.