No one believed me that Elliott Smith's Either/Or had anything to do with Kierkegaard, but Google confirms that once upon a time he followed his girlfriend out to a liberal arts college in Massachusetts and read a lot of Søren. And then the rest of it. My next-door landlady is gone for the next week and a half, so I am trying to get the loud guitars recorded before then. That fuzz pedal is evil in the best way—makes everything squawk—I stayed up late last night, sequencing the mariachi trumpets on "Chupacabras."

Sunny weather makes me feel that the semester's already over—it's a weird surprise to finish my coffee and remember that I still have to go do something at an institution. I expect one of those happy summers without form: write in the morning, read in the afternoon, drink in the evening, but the categories can blur. Like the good old days of that writing fellowship. I hear the English department tried to hire Michael Chabon for their open fiction position (he lives here), but he wouldn't touch it. Prestige can hang itself—all I need is the means to keep hoarding these bright hours, to do my necessaries.

Those of my friends who have gotten married in the last couple of years have really had the most wonderful weddings, and Chris and Felisa's was no exception—a ceremony lasting maybe twenty minutes, completely straightforward, completely sincere. If we could conduct all the events of our lives that way.

The web is very slow—my router is dying again, or everyone is waiting to see whether another tsunami is coming? Whatever trivial dissatisfactions I was going to speak of seem beside the point.

Not much is new here. Sorry to those who thought the Uncle Paul business was alluding to something inappropriate—blame Lauren, she came up with it. To the person who wanted to know about the "theme" of the new record: it's called The Pacific Theater, it will be out this summer.

Track 10 is about heaven as a nightclub where you get to go if your heart is broken badly enough for you to write an immortal song. I know, it sounds pretty twee, but it will have a brass band.

Playing the cello gives me finger pains different from the familiar guitar pains. Trying to write about Faulkner and Wittgenstein without being obvious, flying to Long Beach tomorrow: Chris and Felisa are tying the knot.

who's a free agent?

uncle paul, what are your summer plans?

To burrow into the green earth. There's been talk of an Iowa (on Iowa!) Fourth-of-July reunion in Chicago; I would like to go, but will have to be sneaky about it because of California residency concerns. I'll finish that novel, which I'm not writing this week because it's incompatible with a crunch of schoolwork—I have been thinking really hard about Faulkner. So hard. Hurts so good. I hope to have some menial paper-grading work with the department and, I don't know, will continue to beg my parents for money to cover the deficit, because I continue to be a 26-year-old infant in a big old bonnet in a big old buggy with rubber bumpers.

Music and schoolwork are compatible, at least. That's how it was six years ago: write a paragraph about Salman Rushdie, record a guitar track. Paragraph, guitar, paragraph, oh my God if I tweak the pedal this way the guitar sounds like a helicopter! Badass! These days, after hours of frustration in the studio, the singing angel will descend and suddenly I will be able to sing. The angel stays about an hour before leaving me bereft, but you can get a lot done in an hour. I continue to hope for grace.

the futility of resistance

uncle paul, who do you think should be the next director of the workshop?

Paul D. Wolfowitz! No, the other day I was walking downtown and saw a couple of aged hippies holding up an enormous American flag with its stars rearranged into a peace symbol; the sign beside them read "HONK TO IMPEACH BUSH." Granted, I haven't looked at the Constitution in a while, but I had no idea there was a provision for that. People were honking.

Sometimes I get asked, "Uncle Paul, there's faulty wiring in my bass, and the signal buzzes loudly enough to be audible in the mix. What can I do?" Well, last night I found an answer. The buzz is due to improper grounding, and you can ground it with your body; touch your hand to the strings and it stops. The problem is that when playing bass, sometimes neither hand is in contact with the strings, so you need some sort of grounding that remains steady while you play. I recommend the following simple expedient: take a guitar cord, slide one end under the strings above the nut, and stick the other end down your pants. The pressure of your waistband against your ass will give you a nice strong connection, and now you're totally jazzed up and can play bass all night long.

The comment box wants to know if Kripke's theory of naming with the Baby Name Wizard NameVoyager, and Lord, it just might. Clicking around the psychedelic Java so disoriented me that I could see myself having two babies, naming them "Hesperus" and "Phosphorus," and belatedly coming to realize that that they were the same baby.

But look, it's going to be all right. The other day I found this on the street: 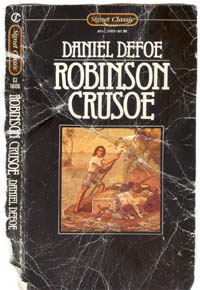 I don't know, not a great week. Yesterday in class I was actually feverish with stress, which is something new and amusing. My alimentary canal is all screwed up and I wake up in the middle of the night with acid gushing back up my gullet; last night I lay awake for a couple of hours because—get ready for this—I couldn't see the point of Kripke's theory of naming. Not healthy or sane, and as far the people who are actually read in the department—Frederic Jameson or Jane Gallop or Barbara Johnson or whoever—I just want to throw up my hands and say "That's a bad picture of the human mind!" or "That's not what language does!" or "You think you're going to solve social problems through literary analysis?" Yelling that in the classroom doesn't help anything, of course. It's sort of embarrassing how tightly my ego gets bound to this stuff, so I keep my gripes to myself and worry that I'm turning into some kind of anhedonic ogre.

I know, quit moaning and come up with something better yourself. It's as if I'm trying to do this with half my brain tied behind my back. I seem to have just discovered that a) what really interests me is philosophy of language, and b) I don't know anything about it. I'm scrambling to catch up, but Jesus, I just finished reading the major Wittgenstein works for the first time; I am a 26-year-old babe in arms. And there's this novel, which sometimes I complain about as well, but which right now seems like the only thing holding together my sense of self—it's one of the few things I can take any pleasure in. This summer, when it's finished, I will crawl into a hole, I will become a tree, I will not hate or hurt anything else.

every great room starts with an adjective

Yesterday I was about to throw away the usual advertising material from my mailbox when I discovered, to my horror, The New Ernest Hemingway Collection.

The spirit of Hemingway, brought home in a captivating new collection from Thomasville.

Every piece tells a story. Every room paints a backdrop for a life lived to the fullest. Set the stage for drama with living rooms, dining rooms, and bedrooms from the new Ernest Hemingway Collection. Whether you're adding a special piece to an existing decor, or starting with a blank page, you'll find styles as classic and unforgettable as Hemingway characters...

Hemingway was famous for his fresh interpretations of classics. Fitting that the furnishings bearing his name would follow in those footsteps. Case in point, the four-poster bed on the left.

As a general rule, Marxist criticism grates on me because it's so utterly predictable, but occasionally I think maybe that isn't Marxism's fault—it's just this dumb world of ours.

I hope it isn't premature to tell the world that Aimee Phan is going to be an Assistant Professor of Creative Writing in Pullman, Washington. All of us at metameat are awful proud.

Tired of abstraction, I went and weeded the vegetable garden yesterday, got dirt under my fingernails, felt very something or other about nature. The enormous tall plant that I have been treating as a cucumber plant has yet to produce any cucumbers; hope I'm not wrong about this. After absorbing enough sun I shut myself in the studio, hooked up the microphones, and shot the sunlight back out, like a photoluminescent animal. Those will be the official first notes of the new record. I may go ahead and try to finish the recording in the next couple of weeks. I need a break from this semester before the real punishment starts. I wander around sick, full of coffee, my head running before itself.